Professor Emeritus of the University of Illinois at Urbana-Champaign, USA
READ MORE

Bernard Spodek was the Founder and the first President of PECERA. He is Professor Emeritus of Early Childhood Education at the University of Illinois at Urbana-Champaign where he has taught since 1965. He received his doctorate in early childhood education from Teachers College, Columbia University, then joined the faculty of the University of Wisconsin-Milwaukee. He has also taught nursery, kindergarten and elementary classes in New York City. His research and scholarly interests are in the areas of curriculum, teaching and teacher education in early childhood education.

Spodek has lectured extensively in the United States, Australia, Canada, China, England, Greece, Hong Kong, Israel, Japan, Korea, Mexico, Portugal, and Taiwan. From 1976 to 1978 he was President of the National Association for the Education of Young Children, and from 1981 through 1983 he chaired the Early Education and Child Development Special Interest Group of the American Educational Research Association. He is widely published in the field of early childhood education.

Dr. Won Young Rhee was elected the President of PECERA at its annual conference in July 2008. Dr. Rhee is Professor Emeritus of Early Childhood Education at Chung-Ang University in Seoul, where she taught for 33 years. She received her master's degrees from Ewha Womans University in Seoul and the University of Washington in Seattle, and her doctorate in Early Childhood Education from Ewha Womans University. After receiving her master's degree, she decided to work as a kindergarten teacher in order to acquire practical knowledge. She joined the faculty of the College of Education of Chung-Ang University in 1975.

Dr Rhee's research and academic fields of interest are child-centered philosophy and education, and parent education. She has published many books for parents and has carried out extensive research in the field of early childhood education, mostly in Korean. From 1983 to 1984 she spent a sabbatical year at Sheffield University in the U.K., where she learned the child-centered teaching method of open education. Dr. Rhee worked in Korea extensively to improve the quality of young children's lives and the quality of early childhood education by persuading the Ministry of Education to pass the Early Childhood Education Act in 2004. She worked as a member of advisers' committees for two different presidents from 1996 to 1998, and from 1999 to 2003 for educational reform in Korea. In addition, she was president of the Korean Society for Early Childhood Education for five years from 1991 to 1995 and also was president of OMEP Korean Committee for three years. 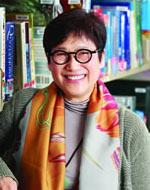 Dr. Betty Chan Po-king was elected the President of PECERA at its Annual Conference in July 2012. She previously served as the Vice President and Treasurer between 2004 and 2012, and was the Founding President of the PECERA Hong Kong Chapter since 2007. Dr Chan is Director of the Yew Chung Education Foundation, operating a network of international schools in Hong Kong, China, and Silicon Valley (USA), providing Early Childhood, Primary, and Secondary education. She received her B.Ed. and M.Ed from the University of Hawaii, specialising in Early Childhood Education, and was later awarded the AAUW Scholarship to begin her Ph.D. at the University of Illinois Urbana-Champaign under the mentorship of Prof. Bernard Spodek. After returning home to Hong Kong to succeed her mother, the Founder of Yew Chung, she later completed her doctorate in 1985 at the Union Institute and University, under the supervision of Prof. Roy Fairfield and Prof. Sarah Smilansky. Dr Chan is a well-known leader in the field of Early Childhood Education in Hong Kong, having introduced concepts such as “learning through play” and “open classroom” in the 1970s. She became a member of the Phi Delta Kappa Educational Foundation in 1973, and was Convenor and Chairperson of the UNICEF "Childhood in 21st Century" international conference in 1989. Later she focused her efforts on developing a new model of international education, uniting the best elements of the East and the West. She is the Chairperson of the Alliance for International Education (AIE) China Branch since 2008. She also served on various public government advisory committees in Hong Kong, e.g. the Standing Committee on Language Education and Research (SCOLAR) of the Education Bureau (2000-2007), Advisory Committee on Teacher Education and Qualifications (ACTEQ) (2001-2007), etc. In recognition of her pioneering work in Early Childhood Education and consistent advocacy for excellence in all levels of education, Dr Chan was awarded an honorary degree of Doctor of Humane Letters from the University of Illinois Urbana-Champaign, US in 2010, Honorary Fellowship from the Hong Kong Institute of Education, and an honorary degree of Doctor of Laws from the University of Bath, UK in 2015.